Government Relations in Environmental Permitting and Land Use Decisions

From offices in Boston, the law firm of Buchanan & Associates provides counsel in government relations to for profit and non-profit, as well as government entities in securing permits, policy changes, or government funding. throughout Massachusetts. A former General Counsel of the Executive Office of Environmental Affairs in Massachusetts, appointed by Governor William F. Weld, attorney Jamy Buchanan Madeja is a registered lobbyist in Massachusetts who has testified frequently before the state legislature for 20 years.

Attorney Madeja represents a broad range of entities involved in environmental permitting and land use decisions, from environmental organizations to businesses. She is the organizing manager of the Massachusetts Legislative Voting Caucus, an organization with over 50 state legislators on its membership rolls. She regularly testifies and is consulted on environmental matters by the Chairman of the Joint Committee on Natural Resources, as well as other legislative groups.

Attorney Madeja serves as legal counsel and government relations adviser to the Massachusetts Marine Trades Association (the MMTA), an organization dedicated to improving the opportunities for employment and recreation involving boating. In this capacity, she works to promote and develop increased public access to waterways, to improve the training and education available for marine trades in Massachusetts, and to increase awareness of the mission, goals and accomplishments of MMTA in the Massachusetts legislature. She was integrally involved in the recent establishment of a vibrant and active boating caucus in the state legislature and has also been instrumental in raising executive branch awareness of the economic benefits and contributions of recreational boating in Massachusetts.

Attorney Madeja has also worked closely with many federal district court judges and appellate judges in the First Circuit, advising the courts on a broad range of legal matters on a contract basis. In this area, Ms. Madeja worked directly for the court, avoiding any potential conflicts of interest, and thereby maintaining her ability to represent private clients or serve as an expert witness.

Attorney Madeja has successfully guided the efforts of many environmentally active organizations, including a not-for-profit recycling company that sought assistance in obtaining a legislatively earmarked grant. She negotiated a satisfactory grant and the program was implemented for the full amount authorized. 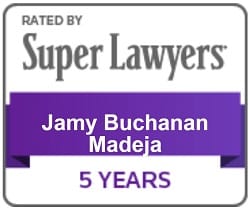